Um. Okay, I need to tell you something and you have to promise not to be mad.

You promise not to be mad?

…okay, so I built a time machine and I was all set to do what anyone else would do with a time machine. Kill Hitler.  I mean, you have to, right? It’s like visiting the Eiffel Tower when you’re in Paris. It’s just what you do.

Do it now and you kill two birds with one stone.

But I wanted to practice first so I decided I’d try killing a lesser dictator for the experience points and I finally settled on Saddam Hussein.

Seen here, about to bust this case wide open.

So I went back to Iraq around 1989 and I waited for him in his bedroom with my trusty shrimping fork. But then he came in and…

Okay, seriously, you have to promise not to get mad.

See, I was all set to do it and then he just starts bursting into tears and saying how he never wanted to be a dictator and that his father pushed him into it and that he had always dreamed of being an actor during the Golden Age of Hollywood but he’d never got the chance and…I just felt so sorry for him, you know? I did.

And that’s when he bludgeoned me with the night stand and stole my time machine.

So…yeah. I may have accidentally given Saddam Hussein the ability to travel throughout space and time.

See this is why I didn’t want to tell you, I knew you’d get mad.

Look, it’s fine! I was worried too! During those fourteen years in an Iraqi prison all I could think off was “Any minute now history is going to be re-written and I’ll find myself in a parallel universe where everyone’s speaking Iraqian…Iraqean…what language do they speak in Iraq?

Anyone? Anyone? Fox News?

Really? Okay, thanks. But it didn’t happen, so eventually just decided he must have pressed the wrong button and gotten eaten by a T-Rex…

His last thoughts were: “Feathers?! LAME!”

…and I went back to trying to learn the French for “Please, enough with the friggin’ electrical genital torture.”

Anyway, 2003 rolls around and after being set free by the brave men and women of the 3rd Armoured Cavalry regiment… 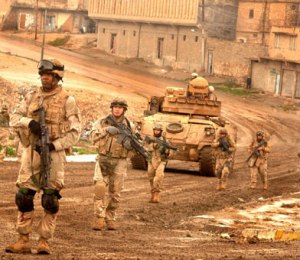 I offered to blow literally every single one of these men. They politely declined.

…I returned home, an empty shell of a husk. It was at that moment that I decided that what I needed to cheer me up was one of my favorite movies, the 1933 Marx Brokers classic Duck Soup made during the Golden Age of Hollywood.

And then, during the climactic musical number “We’re going to War!” I see amongst the crowd of bit characters…well, take a look… 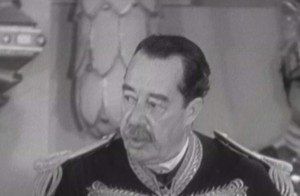 Yeah. Saddam Hussein used my time machine to travel back in time and get himself a tiny singing role in a Marx Brothers Comedy.  Sorry. My bad.

If it helps, it was 1930s Hollywood. He probably had to sleep with a metric ton of casting agents.