Yes my friends, we may not have freedom, apple pie and eagles, but there is one thing that those perfidious Yankees can no longer lord over us!

When the Sparrow Falls is now available for request on UK Netgalley!

Nah, nah, just kidding. Be honest. You know. If you want to CRUSH my fragile spirit.

But seriously, I live for your approval

Oh god this was a huge mistake.

I suppose I should just make this confession upfront; I’m not a Kaijiu fan. Never have been.

Not writing off an entire genre, obviously but it appears to me to be a genre chiefly relying on empty spectacle as a consequence of focusing on a main character incapable of speech, higher level reasoning or emotional growth.

That said, I have been watching the Kong versus Godzilla trailer on repeat and the sight of the two titular monsters duking it out on top of an aircraft carrier is the fucking coolest thing I have ever seen.

I am not made of stone.

So…Godzilla. My experience with this character is as follows:

What can I say? Classic of world cinema.

I have a lot of fond memories of this one for purely personal reasons. Yeah, it’s dumb as all hell but it’s not as terrible as people say.

Honestly, I’d fallen asleep before Watanabe said “Let them fight” though I’m told that makes it all worth it. Must have been a hell of a delivery, I wouldn’t know.

Aaaaand that’s it. So yeah, three Godzilla movies and only one of them was Japanese.

“Okay, so you have no cred whatsoever.”

Oh wait, I tell a lie, I religiously watched the Saturday morning Godzilla cartoon  in the nineties. 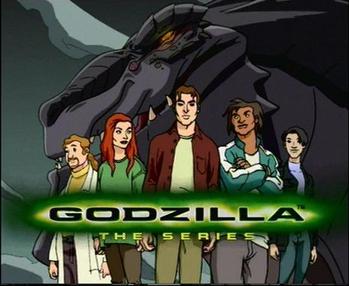 Man, Adelaide Productions, whatever happened to them? They also did the Men in Black cartoon which was another movie tie-in animation that was so much better than it had to be...

“Sorry, sorry. You can take the mouse out of the animation…”

Hideaki Anno is a celebrated Japanese animator and filmmaker who has worked on dozens of films over a long celebrated career and none of that means jack shit because he created Neon Genesis Evangelion and he will never not be the “the guy who created Neon Genesis Evangelion“. Dude could cure cancer and it would still be the second line of his obituary after “the creator of Neon Genesis Evangelion died today”. That show, which ran from 1995 to 1996 started out as a pretty typical (if far more stylish than usual) “teens in mechs battling monsters” show before transitioning into an emotionally fraught exploration of adolescent psychology, mental health and abuse served with a heavy dose of surrealist imagery and Christian symbolism. 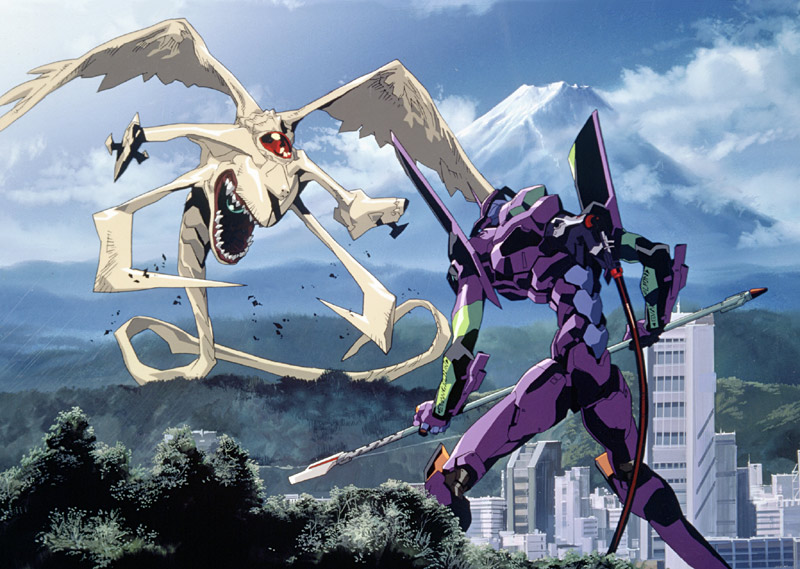 Plus, the robot battles were sick, brah.

Godzilla’s home studio, Toho, had put the franchise on hiatus with 2004’s Godzilla: Final Wars, but after the positive reception of Ken Watanabe saying “Let Them Fight”, Toho decided to bring back Godzilla to kickstart a new continuity for the character.

Now understand, if you’re a fan of the Godzilla series what I’m about to say isn’t meant as a criticism, more an observation. There are two basic types of Godzilla movie: Godzilla versus Humans and Godzilla versus Other Monsters. It’s a pretty limited schema, but credit where credit’s due, the creators of this series have managed to ring a fair bit of variety out of these two scenarios, particularly in terms of Godzilla’s character, which is doubly impressive when you remember we’re talking about a large non-verbal animal. Godzilla is something of a renaissance lizard, a Kaijiu for all seasons. In the original he was a very deliberate representation of Japan’s lingering trauma over the nuclear bombings of Hiroshima and Nagasaki as well as a response to the more recent deaths of the crew of Daigo Fukuryū Maru as a result of US nuclear testing in the Pacific. He’s also served as a metaphor for Japanese war guilt, a gentle Friend to All Children, a reluctant guardian of humanity, a vindictive destroyer and even just a big dumb lizard. After 30 films, you’d be forgiven for thinking there wasn’t really much else to do with the big lug. That’s probably why Anno got the nod to direct Shin Godzilla, given his success in putting a new spin on the seemingly tired giant mech genre.

How did it go? Shin Godzilla was a massive, and I do mean MASSIVE success in its home country, opening at number one and out-grossing the 2014 American Godzilla by almost a quarter and tripling the box office take of Godzilla: Final Wars, the previous Japanese installment. It also won Picture of the Year at the Japan Academy Awards, which is kinda like a new James Bond movie winning Best Picture.

This thing was huge in Japan, appropriately enough. In the West, though, the reaction has been a bit more mixed. Not bad, by any means, but there’s definitely a sense that this movie is not remotely interested in catering to Western sensibilities as to what this kind of movie should be. And that’s fair, this is most assuredly not your typical Godzilla movie, which is probably why the Western DVD release thought it necessary to put one of the most underwhelming review pulls I have ever seen on the cover:

“Of all the movies to feature Godzilla, this is certainly one of them.”

END_OF_DOCUMENT_TOKEN_TO_BE_REPLACED

Woke up today to learn that there was a review of When the Sparrow Falls on Publisher’s Weekly!

“Only if you believe the BIBLE OF MY INDUSTRY.”

“Sharpson’s provocative debut, adapted from his play The Caspian Sea, takes readers to the early 23rd-century Caspian Republic, an authoritarian nation-state reminiscent of Cold War–era Eastern Europe, where the remnants of pure humanity hold out against an artificial intelligence-controlled world. When a popular Caspian journalist dies and is discovered to have been an AI in disguise, his estranged AI wife, Lily, is dispatched from the outside world to identify the body. Nikolai South, a long-serving, unambitious State Security agent for the Republic is assigned as Lily’s liaison, only to be rocked by her uncanny resemblance to his own late wife. During their time together, South must determine if Lily is involved in a plan to smuggle digitally converted human consciousnesses out of the Republic—and along the way, he becomes caught between warring intelligence agencies and learns dark truths about the Republic’s origins. Sharpson skillfully evokes an atmosphere of paranoia, duplicity, and secrecy, while using the conflict between humans and AIs to probe themes of self-awareness, identity, and memory. As Sharpson pushes the narrative beyond South’s present and into an increasingly messy future, he showcases the untenable nature of the Caspian Republic and its corrupt framework. The result is a thoughtful sci-fi thriller that skillfully blends a retro spy aesthetic with future technology.”

“Nobody cares, when are you reviewing Raya?”

“When Disney + stops asking for my bone marrow in payment.”