As Buzz Aldrin once noted “second comes right after first” and the Fleischer Brothers, Max and Dave, seem to have been cursed to always be the Buzz Aldrin to Walt Disney’s Neil Armstrong. A mere year after Snow White, Paramount pictures released Gulliver’s Travels, the second cel-animated feature film ever, directed by Dave and produced by Max. Of course, just because Buzz Aldrin went second, does that mean he was somehow an inferior astronaut to Armstrong? Course not, but while Gulliver’s Travels was a fantastically animated feature, it just didn’t create the same sensation that Snow White did and while it certainly was a success at the box office, the Fleischer’s studio quickly found itself treading water financially. Smarting from the financial strain of Gulliver’s Travels, mired in the production hell of their second feature Mr Bug Goes to Town and with Max and Dave’s relationship having degenerated to Cain and Abel levels and with all parties coming to the realisation that animation is a demon bitch that burns alive all who dare love her, now was really not the time to take on an ambitious new project. So when Paramount approached the Fleischers asking them to make shorts featuring this new Superman character all the kids were going cuckoo over, Max and Dave told them that they could only do it with a budget of $100,000 an episode (or, around four times the cost of the most expensive Disney shorts). In 1940s dollars that was equal to “Holly Hannah! That’s a lotta scratch!” and Max and Dave expected Paramount to tell them to screw off, so they were stunned when the execs made them a counter offer of $50,000 and episode (equal to “Nice little pile. Goddamn, that’s a nice little pile”). Unable to turn down that kind of money, the Flesichers started work on what is still, adjusted for inflation, the biggest budgeted series of animated shorts ever made. And I cannot overstate how amazing these shorts are. 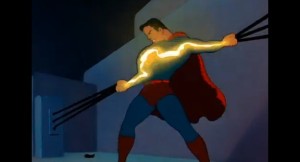 Here is some more. 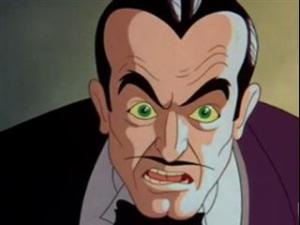 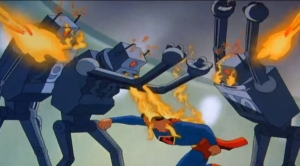 This series had it all, the cast of the Superman radio show doing the voices, rotoscoping used to set a new standard for realistic animation of human figures, an epic score, one of THE all-time great Lois Lanes and the art design YE GODS! There’s a reason Bruce Timm cites this as one of the major influences on Batman the Animated Series.  This series is the reason that Superman flies instead of just jumping everywhere like a grasshopper.
Unfortunately, something this awesome cannot exist in our universe for too long and there were only a paltry seventeen shorts made and only nine were actually produced under the supervision of the Fleischers. Max and Dave finally told Paramount that they just couldn’t work together anymore and Paramount took over the studio and renamed it Famous Studios, which you’ve probably never heard of, ironically enough. The animation team the Fleischers had put in place was solid enough that there wasn’t really a noticeable dip in quality after they left, but the eight Famous shorts are noticeably different from the previous nine and not just because of the change in management. After Pearl Harbour the shorts shifted focus from science fiction stories of Superman battling dinosaurs, robots and laser beams and instead featured Superman battling the forces of the Axis. Straight up propaganda? Absolutely. But if the sight of a gorgeously animated Superman beating up Japanazis doesn’t get your blood pumping then we have nothing further to talk about. Today’s short, Eleventh Hour, is my favourite of the whole series and part of the reason why is that it’s so markedly different from the other sixteen. The Superman shorts weren’t gag cartoons like the Looney Tunes or music based like the Silly Symponies. These were dramas that had to actually tell a story in seven minutes and so they were quite heavily reliant on formula. The typical Superman short goes:
It’s a good system, no one’s knocking it, least of all Mouse. But what makes Eleventh Hour so fascinating to me is that in this one, Superman is not simply reacting to the disaster. He is the disaster. The setup is fantastic, the kind of status quo shakeup you could get a year’s worth of comics stories out of, easy. Lois and Clark are embedded in Tokyo, reporting for the Daily Planet. Every night, Clarks leaves their hotel room at eleven o’clock and flies around as Superman, just WRECKING THE JAPANESE EMPIRE’S SHIT. Comic book writer Mark Waid described Superman like this: “If he’s your friend, he’s the best frind you’ll ever have. If he’s your enemy? God help you.” Here we get, for the first time, a glimpse of what Superman must be like when you’re on the receiving end of his rage. This is not a smiling, all benevolent, New Testament messiah, but a stern, shadowy, Old Testament nemesis. And the short is just fantastic at using atmosphere and lighting to cast Superman in a new, sinister light. Make no mistake, less than a year after Pearl Harbour and with their sons and fathers still engaged in a brutal deathmatch with Tojo’s forces in the Pacific, there would have been no little catharsis for audiences watching this in the forties to see THE pre-eminent American pop culture icon (yes, he was already that, even this early) emerging from the shadows to strike terror into the hearts of the nation’s enemy. It’s almost like the vicarious satisfaction of watching a serial killer in a slasher movie cut down the really obnoxious teens, if those teens were members of one of the most brutally rapacious colonial powers of the twentieth century. Is it a particularly enlightened and humane work of art? It is not. But as a piece of propaganda its damn near flawless and technically brilliant to boot. And, for what it’s worth, it’s noticeably lacking in the truly egregious racism of other WW2 era shorts like Tokio Jokio or Bugs Bunny Nips the Nips.
One sequence early at the start has always stuck with me, ever since I saw it as a kid.   In the dead of night a Japanese warship silently drifts loose of its moorings and sinks into the harbour. Sirens wail, searchlights rend the darkness. One catches a figure pressed against a steel girder, square jawed and grim as granite. The searchlight passes over him and then, as if the operator suddenly realised what he’s seen, scans back. But it’s too late. He already gone, vanished into the night.

Faster than a speeding bullet.