I hate to open a review with such a cranky, old man line as “They don’t make ‘em like this anymore”.
So I won’t.
Good to be back everyone! Missed you all and your sweet, ego-affirming pageviews.
Now then.
My hairy BOLLOCKS but they don’t make them like this any more, do they?
Fittingly,given its dual nature, Who Framed Roger Rabbit occupies a special place in both the history of mainstream Hollywood blockbusters and American animation. It’s a central text in what was something of a golden age of the big summer tentpole picture (Ghostbusters, Indiana Jones, Back to the Future). But it’s as an animated movies that Roger Rabbit has its real significance. Chances are, if not for this movie a whole load of the films I’ve reviewed here would never have happened. Firstly, let’s take a look at the state of American animation in the late eighties. Theatrical shorts have gone the way of the horse-drawn carriage and the wireless-polisher. Disney feature animation is in a creative rut, and only Ralph Bakshi and a few others, working furtively from a secret rebel base, keep the full length animated film alive as an artform. The vast bulk of animation is now on television, rushed, cheaply produced, schilling for the toy industry and stifled by increasingly conservative broadcast standards for whom anything harder than the Smurfs is pushing the envelope. Large packs of feral dogs roam the landscape, and cannabalism is rife. 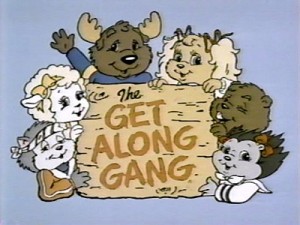 Bad times, is what I’m sayin’.

Disney snapped up the rights to Gary K. Wolf’s novel Who Censored Roger Rabbit? in 1981 as soon as it hit the bookshelves. Apart from sharing a few character names and some very broad plot points, the book and film aren’t even on speaking terms. The book is set in the present (well, the eighties) and Roger and his fellow toons are newspaper cartoons (with Hagar the Horrible, Dick Tracy and other characters making cameos). I haven’t actually read the book but I’m going to go out on a limb and say the movie vastly improves on the source material. For one, having cartoon characters working in the old Hollywood studio system just feels much more organic and setting it in the forties makes it feel more like a film noir. I’m not the only one who thought so either, Wolf’s later novels in the series went out of their way to tie themselves more closely to the movie, even retconning the whole first novel as a dream of Jessica’s.

And if that scene did not involve her stepping out of the shower a lá Bobby Ewing then there is no God.

Robert Zemeckis was attached to direct as early as 1981 but was given the boot by Disney when two of his films tanked at the box office. The project then kicked around the studio for a few years until Michael Eisner and Jeffrey Katzanbur…Katzenbar…(dammit just once I am going to spell his name right) KATZENBERG stepped in and applied the paddles. Eisner and Herr Skull were united in their belief that Roger Rabbit was going to be the movie to relaunch Disney as the pre-eminent force in American animation. Initially, the idea was that the film’s animated sequences would be done by Disney’s own in-house animation team. Then Eisner took Katzenberg down to the basement where the debased remains of that once great cadre of animators was kept.
“What…what are they?” Katzenberg asked in a strangled whisper.
Eisner simply stared ahead and said: “They were once men.”
Clearly, some fresh talent was going to have to be brought in to pull off what was going to prove to be one of the most technically challenging feats in the history of animation. Canadian-British animator Richard Williams was brought in along with a crack-team of international animators (many who would later be brought in to work on the Disney movies of the renaissance). Williams didn’t want to go to Los Angeles, like any sane person, and insisted on working in London resulting in the entire production being moved to England to accommodate him, hence why most of the live action cast are British.
Zemeckis was also brought back on to direct since in the intervening years he’d gone from “failed director” to “man who can just stand in a room and cause money to rain down at will”.  The international shoot and pioneering special effects combined into the most expensive production for an animated movie that there had ever been, with costs so high that Katzenberg had to talk Eisner out of pulling the plug. When the movie finally rolled into theatres $40 Million dollars over budget there was a whole lot riding on it.