Okay, before we get into the actual movie let’s talk about The Ball. As in, “When are Marvel going to drop the ball?” We are now on the eleventh film set in the shared Marvel Cinematic Universe and the studio has yet to release a flick that was worse than the perfectly acceptable Incredible Hulk or the shaggy-but-still-fun Iron Man 2. And Marvel fans are starting to get paranoid. Sooner or later Marvel’s going to drop the ball, law of averages. One of these movies will eventually flop, and when it does, all we can do is hope that it doesn’t flop so badly that it puts the whole MCU project in jeopardy. And with a movie like Age of Ultron, the stakes are even higher. If Ant-Man tanks, Marvel will walk it off.

If Age of Ultron flops, or even performs below expectations, it could bring the whole thing crashing down. So, as a huge fan of these movies, I was more than a little nervous sitting down to last night’s screening and I knew I was not alone. Looking in the eyes of my fellow Marvel cinephiles I saw the same fear that would take the heart of me. Because one day, Marvel will release a colossal turd.

I don’t know if Age of Ultron is the best movie yet in the MCU. You’d probably have to lock it in a room with Winter Soldier and Guardians of the Galaxy and see who emerges victorious but I do know that it is far, far superior to The Avengers. 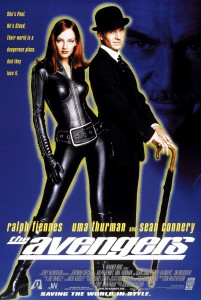 Not that one. Although, now that I see it, Uma Thurman does look like she’s playing the Black Widow.

2012’s The Avengers is an absolute blast but it’s not really a movie I’d watch over and over again. It’s more like a triumphant third act finale to all the movies that went before it than a film in its own right. By comparison, Age of Ultron feels more like a complete story with a beginning, middle and end.

Whereas Avengers 1 ended with the Avengers going their separate ways but promising to re-team if the world needs them, Avengers 2 instead shows the team already re-assembled and having been working closely together for the last few years. After an assault on an Eastern European fortress to resolve some dangling plot threads from Avengers 1 and Winter Soldier, Iron Man (Robert Downey Junior) is shown a vision of a terrible future of the future by new villain the Scarlet Witch (Elizabath Olson) that leads him to create a new Artificial Intelligence called Ultron to protect the world. Because Tony Stark is one of those guys smart enough to create super-intelligent AI but not smart enough to realise why that’s a horrible, horrible idea.  I wish I could say that’s unrealistic.

The movie’s main strength is this; both the Avengers as characters and the actors playing them are now a team, all working together and at the very top of their game. Sequels are usually bigger and louder but in many ways this is a far quieter film than the first one. Scriptwriter/director Joss Whedon seems a lot more confident this time around. One of the very best scenes in the whole movie is just four minutes at a party where the Avengers are just hanging out, cracking jokes and having a good time together. I can’t imagine a scene like this in the first movie, where half the team spent half the movie beating up the other half (it was a movie of three halfs). Here, Whedon is relaxed enough to just let his characters enjoy each other’s company and some of the finest stuff here are the little personal moments which I’m not going to spoil. Importantly though, this group feels like a bunch of friends who genuinely love each other. There’s one line where Tony asks how they can defeat the latest threat that’s risen against them and Steve (with that wonderfully innocent conviction that Chris Evans does so well) says “Together”. That’s pretty much the whole premise of the movie. When these guys stand together, there is nothing the universe can throw at them that they can’t throw right back.

That said, when it is time for action, the movie brings spectacle that makes the first movie’s Battle of New York look downright cheap. The final epic show-down is as big and comic-booky a spectacle as I can remember seeing. Also cool? These superheroes save people. Like, all the time. A significant portion of the run time is given over to our heroes flying through the air and doing everything they can to protect the people down below. It’s a rare superhero film where protecting the innocent matters more than punishing the guilty.

Speaking of Ultron, James Spader gives a very interesting, very human performance of a villain who in the comics is usually portrayed as a Dalek with legs. Far from being emotionless, the Avenger’s machine adversary, if anything, feels too much. He’s by far the most dangerous adversary any of the Avengers have faced, but Spader gives him surprising moments of vulnerability and even tenderness.

Age of Ultron is a thrilling, gorgeous looking, funny as hell and often surprisingly sweet superhero epic. The Ball remains very much airborne.