“Are you tarnishing the legacy of one of your beloved classics again? I thought we were past this.”

“Then what, pray tell, is this the fuck?”

“You have ten seconds to explain yourself, sir.”

“Okay, see it stars Kion, Simba and Nala’s son, as he forms the Lion Guard, an elite group of animals whose sworn duty it is to protect the Pride Lands from danger.”

“Okay. That actually sounds like a pretty decent premise if handled well…”

“See, Scar used to have superpowers…”

“WOW. Ok. Stop right there. Pull this bus over…”

“See, Scar had the magical Roar of the Elders and led the Lion Guard…”

“And when he tried to get the Lion Guard to turn against Mufasa and they refused he used the roar to destroy them.”

“No. No. That never happened. You lying media conglomerate.”

“But then because he used the roar for evil he lost it.”

“So why didn’t he just use it against Mufasa in the first…no, you know what I’m not even going to engage with the idea. So tell me, does this travesty ignore Simba’s Pride or take place in the same continuity?”

“Neither! It canonises some aspects while blatantly contradicting others!”

“But I haven’t told you the best part!” 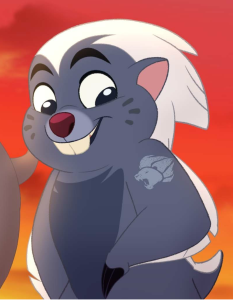 “Who’s the tatted up chipmunk?”

“Alright. Fair. Tell me about Bunga.”

“That’s Scrappy Doo. You re-made Scrappy Doo. As a honey badger. An animal legendarily difficult to kill. This is like crossing Ebola with the flu. Why in the name of all that is holy would you do that? What is he doing?” 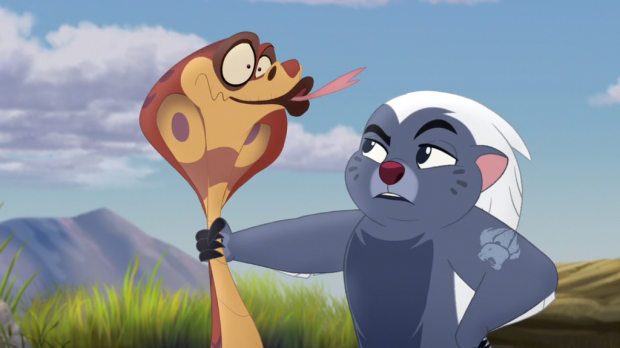 “He’s beating up a cobra that was trying to eat a cute little hyrax .”

“Because he defends the circle of life.”

“So what? Cobras don’t get to eat? The circle of life doesn’t include cobras?”

“Of course not. They don’t deserve to live. They’re not cute and marketable.”

“Give him a spinoff? Sure thing!”

“But that goes against the whole…the thing…when we die our bodies become the grass?”

“Did you even see The Lion King?”

“Oh yeah. Love that movie! “You must feel the force flowing through you!”

“It sure is! That’s why we got James Earl Jones back as Mufasa!”

“Yeah. For one episode. Then we recast him.”

“So you got possibly the most distinctive voice-actor in human history and replaced him after one episode. Isn’t that incredibly distracting?”

“Is it ever! He acts as Kion’s wise old mentor. He’s in every episode!”

“Ah. So instead of a once off and miraculous visitation, Mufasa just pops in to say hi whenever? Our hero just routinely communes with the dead?”

“We’re trying to get kids into the occult. That’s what the voices in our heads want. Maybe then we will know peace. Maybe.”

“This is awful. Up, down, left and right. Terrible.”

“OK. Yes. That opening theme is actually pretty kickass. But the songs are awful and Rob Lowe as Simba makes me miss Matthew Broderick. He makes. Me. MISS. MATTHEW. BRODERICK. DO YOU HAVE ANY IDEA HOW THAT MAKES ME FEEL?! And worst of all? The writing. It’s cliché jenga, they’re stacked one on top of the other up and up and up…”

“THE ORIGINAL WAS MADE FOR THE EXACT SAME AGE BRACKET AND IT WAS ONE OF THE GREATEST ARTISTIC ACHIEVEMENTS IN WESTERN ANIMATION. ”

“GO HOME DISNEY. GO HOME. SOBER UP. AND THINK ABOUT WHAT YOU DID.”