Yes,  I have returned!

And I have another review for you!

But it’s a nice one? Mostly?

So what did I see this time around?

Look at that. Look at the composition. The framing. The immediate sense of tension, telling us all we need to know (and begging us to infer further) about these strained and/or  possibly tender relationships – dominance, submission, fear, hate, love, hope.

It’s already a good film, and I haven’t even looked at the film yet.

The Handmaiden comes from the brain of Park Chan-Wook, who honestly hasn’t really done a film like this before. His previous films , such as Oldboy, were taught, vicious revenge thrillers for the most part.

This new picture is something approaching a love story, although it is also taut and slightly vicious – a twisty and turny psychological thriller hidden underneath it’s stunning period clothes.

The source material, the novel Fingersmith, has been transplanted from Victorian England to Korea under Japanese annexation. While I am admittedly unfamiliar with the original, this added context creates many layers that are fascinating to pick apart – the main house in which the action takes place is a mish-mash of British and Asian influences, and the subtitled dialogue is colour coded (white for Korean, yellow for Japanese) – characters will slip between the languages when they search for words, become excitable, or attempt to deceive each other.

Deception, as it turns out, is pretty much The Handmaiden‘s raison d’etre.

Shy and reserved, we see her being whisked away from her family (one sister screams “It should have been me!”) to serve as the titular Handmaiden to Lady Hideko (Kim Min-hee), the niece (and, creepily, betrothed wife-to-be) of Mr. Fancy-pants with the big house and all the books. Lord Kouzuki (Cho Jin-woong) is obsessed with literature and eroticism (though possibly not in that order), and regularly has his niece/object of creepy desire read to an assemblage of creeps. If this all sounds a little creepy, well it is.

Slowly, the handmaiden and her mistress connect. And slowly, they become more than just friends.

Well, uh… I mean… they do, but only after many diversions/revisions/betrayals.

For The Handmaiden has many hidden tricks up it’s billowy kimono sleeves, and the film doubles back to reveal that the shy, innocent Tamako is in fact a pickpocket called Sook-hee, and she is scamming the lady with Ha Jung-Woo’s Count Fujiwara, who isn’t really a count at all but a con-man who intends on marrying Hideko and committing her to an asylum, splitting her fortune with Sook-hee when she assumes Hideko’s identity.

This early stretch is wonderful, with the slow reveals building a sense of wonder and “what will they think of next?!” giddiness that really helps the film build up steam. The “It should have been me” sister, for example, is a fellow thief pissed off at having been passed over for the gig. The film is stuffed with little reversals like that – context is constantly added to seemingly readable actions and dialogue throughout.

But, boy, does The Handmaiden like doubling back. Over the course of the 2 and a bit hours, everything is reversed and everybody is betrayed about 18 times (approximately), and at one point I got seriously lost as to who was lying to whom, and if they even knew they were supposed to be lying at the time. The film does right itself by the end, but there is a stretch in the middle where it’s all a bit clever for it’s own good.

Anyhow, let’s all get to what you came here for. 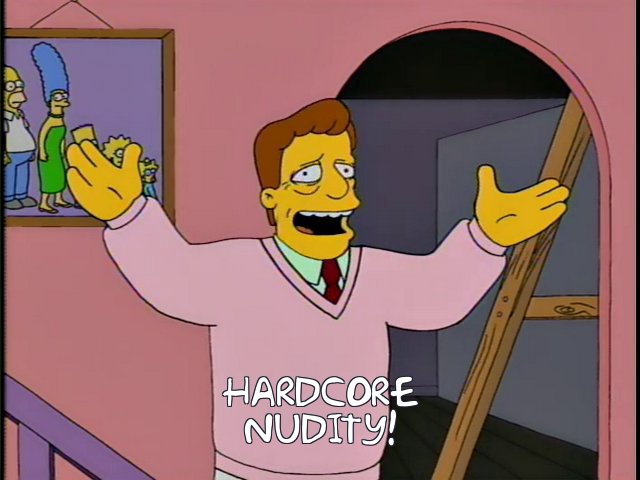 And fucking hell, you’re gonna get your money’s worth.

In case my earlier hints didn’t make it clear, Sook-hee and Lady Hideko become lovers over the course of the film, and it gets pretty fecking explicit.

An early scene where Sook-hee uses a thimble to file down her mistress’ broken tooth (I don’t remember that in Peter Pan) is rife with tension, both of the sexual and regular variety, and the possible discovery of their affair by either the grifter Count or the pervy Uncle hangs over the film.

But the film has no time for even that scene’s relative subtlety, and the sexy sex scenes come thick and heavy. Here’s an artist’s impression of my face during the bit where Hideko and Sook-Hee full-on scissor for what seems like 8 years.

Now, I have no problem with depicting sexuality on film. I guess I have issues with a male director creating scenes like this. Some part of me worries if it’s exploitative, especially of Kim Tae-Ri, here making her feature film debut.

But I stood back from the film, and looked at the scenes in context. The piece is careful to focus on the characters themselves and not just their bodies, and it is clear that the scenes are hugely important in their own discovery and arcs for the picture as a whole.

I’m afraid to Google it.

Truth be told, the scenes of smoking mustachioed men making Hideko read them dirty books are more exploitative, and that’s pretty much the point.

The Handmaiden has many more surprises in store for those who don’t storm out (several at my screening did), and to spoil them here would be both unfair, and also take me about six hours – such is the labyrinthine nature of the plotting.

Suffice to say, the film is incredible to look at – the cinematography is breathtaking, the period costumes and production design are intensely beautiful, and the acting throughout is fantastic.

A late-occurring Oldboy-style torture scene appearing out of  nowhere is a little off-putting, and not really in the way the filmmakers intend. There’s even an octopus as a bit of a throwback .

But, overall, this sequence doesn’t derail the movie much. It’s still an exciting, blackly hilarious film, which features one of the best scores I’ve heard in donkeys years. Seriously, listen to this fucking theme.

There’s even a little bit of nudity in the thumbnail there for ya.

Anyhow, you should check The Handmaiden out if you like lush period pieces that engage and challenge you as a viewer. It’s well worth the possible awky mo-moes.

Don’t bring your parents , though.  It made my Easter particularly uncomfortable.
Frog Out.