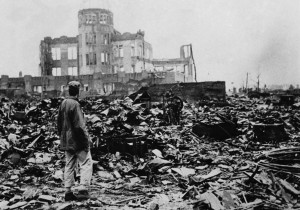 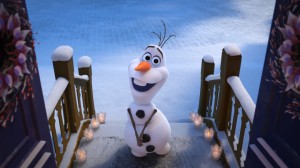 So the movie is a retelling of the original Peach Boy myth, with Momotarō commanding an aircraft carrier and dispatching Monkey, Puppy and Pheasant pilots to bomb the island of the demons, Onigashima.

So yeah, one of the reasons why this thing is so long is because they simply had to have the meticulously recreated bombing of Pearl Harbour using actual footage of the bombing. Oh, and Bluto from the Popeye cartoons is there as well as a stand in for America (not the only instance of Axis Powers using American cartoon characters as we shall see in the next review). And I have to say, kudos to the nameless Japanese voice actor who voiced Bluto because that is a damn good impression of Gus Wickie’s Bluto. That, or they just recorded a walrus eating a ham. Having bombed the “demon’s fleet”, our adorable war criminals return home but their plane has taken too much damage and they have to make a water landing. But fortunately, (or unfortunately) they’re rescued by the mother bird of a chick they saved on the way over to wake the sleeping giant. And the movie ends with Momotarō telling his army of critters that the enemy’s fleet has been destroyed and that it’s all gravy. 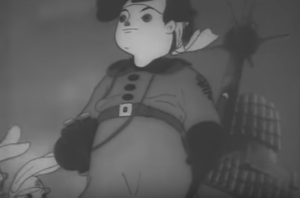 “Guys, there is literally no way this can come back to bite us in the ass. We have thought this through, believe me.”

The first thing that struck me is that this is not just a crude, tossed off piece of propaganda like, say, Fascist Jackboots Shall Not Trample Our Motherland. There is some real craft here. The opening scenes are evocative and effective, and the character designs are downright adorable with the notable exception of Momotarō himself who looks like the alabaster boy prince of nightmares. 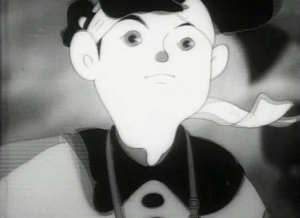 The short also completely avoids the mistake of Fascist Jackboots by giving the audience compelling protagonists. The Monkey and Puppy are genuinely adorable and are given plenty of comedic business and funny visual gags. Again, it feels like an actual cartoon rather than simply a work of propaganda. Which doesn’t change the fact that this whole thing is completely, um, what’s the word I’m looking for?

Obviously, all propaganda is morally iffy and if I’m honest, even something like Der Fuehrer’s Face makes me a little uneasy. But Momotarō no Umiwashi is on another level not just because it’s propaganda for one of the most brutal regimes of the 20th century, not just because of its jubilant depiction of an unprovoked attack that killed or wounded over 3000 people but because this short was created for and specifically aimed at children. This would be even more explicit in the short’s sequel Momotarō: Umi no Shinpei, the first full length animé movie. That movie, as well as presenting a sickeningly white-washed depiction of Japanese colonialism, ends with Japan achieving victory in the Pacific. The final scene is of children playing at parachuting onto a chalk outline of the United States.

The next generation being readied. For the next war.

Art or Propaganda?:  Propaganda, excellently executed to a scary degree.

How does this rate on the Jingo-Meter?: Yeah, Imperial Japan is great and all and will bring all four corners of the earth beneath its benevolent tyranny but the short isn’t preachy about it. 3 Godzillas breathing atomic fire while bowing to the Emperor in front of a rising crimson sun out of 5.

What’s going on with the War?: In March 1943, Andrey Vlasov publishes “Why have I taken up the Struggle against Bolshevism”, explaining his defection to Nazi Germany, Erwin Rommel’s final battle in North Africa, the Battle of Medenine, ends in defeat for the Axis and Operation Spark, an attempt to kill Hitler with a bomb disguised as a bottle of booze, fails due to a faulty detonator.

Dude, is this racist?: No. If it’s racism you’re looking for, check out the sequel.

Should I buy bonds?: BUY BONDS!