Over the Garden Wall is the creation of Adventure Time alumnus Patrick McHale which first premiered on Cartoon Network in 2014. Consisting of 10 ten-minute episodes, the series is a gorgeously animated brew of 17th, 18th and 19th century Americana, children’s literature and deep cut references to the Golden Age of animation. Which, as you can probably guess from that description, means that if it was any more my jam I’m be spreading it on my crumpets. Throughout October I’ll be doing short reviews of each episode so let’s crack on. Episode 1. The Old Grist Mill.

After the opening song a montage introducing many of the characters we’ll meet over the course of the series we meet two young boys, Wirt and Greg (and a frog) making their way through a dark, spooky forest. Wirt realises that he has no idea how they arrived there and begins to panic because this place is creepy as hell and everything just seems slightly off. Greg, who’s very much “the Mabel” in this Dipper/Mabel dyad, offers to leave a trail of candy behind them but that’s of little use since they’re already deep in the spooky, scary forest.

They come across an elderly woodsman carrying a lantern and chopping down trees that are filled with a strange, black ooze. Wirt’s too afraid to approach the woodsman but then the boys are approached by Beatrice, a talking bluebird who offers to help them escape the forest. She flies off when the Woodsman overhears them talking and demands to know what they’re doing.

The Woodsman tells them that they’re in a place called “The Unknown” and that they need to am-scray because “The Beast walks these woods”.

The Woodsman takes them back to his mill and offers to let them stay the night. Wirt is getting serious stranger-danger from the Woodsman and asks him what he’s doing out in the forest. The Woodsman tells them that he has to grind the wood of the Edwelweiss trees into oil to keep his lantern lit. Wirt nervously suggests to Greg that they might need to knock the Woodsman out and make a run for it, before immediately dismissing that as a really bad plan. Seeing that Wirt’s nervous, he tells the kids that they’re free to go whenever they want but that if they’re still at the mill after he’s finished with his work, he’ll try to help them fin their way home.

Unsure of what to do, Wirt stays by the fire while Greg goes looking for his frog.  Outside the mill he gets attacked by a terrifying beast who, as Greg notes, has beautiful eyes. 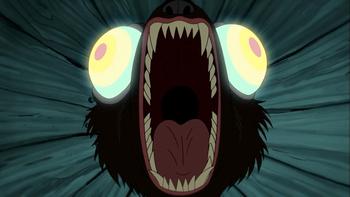 Greg runs back into the house, chased by the beast. The Woodsman tries to defend the children but gets knocked unconscious by Greg, who didn’t get the memo that they weren’t going with that plan.

The boys are chased by the beast into the mill where it ends up getting caught in the gears. This causing the whole mill to break apart but also dislodges one of Greg’s candies from the beast’s throat, which causes it to change back into a perfectly ordinary dog. (EDIT: Thanks to Alice Shattuck for pointing out that it’s not actually the candy that caused the dog to transform but the turtle that the candy was stuck to because it turns out that the black turtles have a mysterious connection to the Edelweiss trees and the Beast itself because dang but the lore is deep in this despite the whole thing clocking in at 100 minutes). The Woodsman regains consciousness and is furious to discover that the mill is gone and most of his oil has been lost. Wirt says that, hey, at least they got the Beast and the Woodsman yells that the dog was not the Beast. A beast, sure. But not The Beast. Wirt gets angry at Greg but the Woodsman tells him that as the elder brother, Greg’s dumb-fuckery is his responsibility and as an older brother myself that I find that sentiment to be rank Only Child Privilege. Anyway, the Woodsman wearily sends them on their way, calling after them “Beware the Unknown! Fear the Beast! And flee these woods if you can!”

How was it?: The Old Grist Mill is simultaneously an excellent cartoon and probably the worst OGW episode. Not a criticism, it just shows how insanely high this series sets the bar. It’s great, but the night-time setting means we don’t get the gorgeous autumnal colours of the later episodes. Beatrice (the blue-bird) only gets an early-bird cameo (see what I did there?) and while Lloyd is fantastic as the Woodsman, he’s no Auntie Whispers or Quincy Endicott. My point is, knowing all the fanastic stuff that’s coming down the line makes this first episode seem a little drab in comparison.

Holy Crap, that sounds like…: Wirt is played by Frodo Baggins himself, Elijah Wood. The Woodsman is played by a magnificently husky Christopher Llloyd.

Can I see some references?: This episode draws heavily on classic fairy tales. The two children lost in the woods, the candy trail and the Woodsman are all echoes of Hansel and Gretel. Greg’s terrified “You have beautiful eyes…” to the dog is a clear reference to Little Red Riding Hood. As for animation references, the creepy forest with its macabre, scowling trees is pure Snow White.  And the whole concept of a huge, gooey monster becoming small and harmless after a single corrupting influence is expelled reminded me very much of Hayao Miyazaki.

This frog’s name is: After the Woodsman tells Greg to give the frog a proper name, Greg spends the rest of the series trying to do just that. This episode, the frog is called Kitty and Wirt (to avoid confusion, Greg renames Wirt “Kitty”)