Beatrice, to her credit, is all “go, go, go, go” but Wirt has never seen The Wicker Man and tries to ask one of the Pumpkin people for directions. When the townsfolk learn that Wirt and Greg ain’t from around heyah (and that Greg stepped on one of their pumpkins), they lock the doors and bring the boys before their leader, Enoch.

In silky, menacing tones, Enoch tells them that he must punish them for their transgressions and sentences them to…a few hours community service.

Thinking that they’ve got off lightly, the boys spend a pleasant afternoon doing farm labour until they’re given their last task; digging two holes in an abandoned field. Beatrice is all “…seriously?” but Wirt refuses to believe there’s anything amiss until Greg uncovers a skeleton.

The pumpkin folk arrive and Wirt thinks that they’re goners but then the skeleton walks out of the hole, puts on some pumpkins and then joins the other townsfolk who are, of course, all skeletons. As Pottsfield celebrates another successful harvest, Wirt, Greg and Beatrice continue on their way having learned a valuable lesson about prejudice.

Sometimes the creepy skeleton people just don’t want you to step on their pumpkins.

How was it?: Hard Times at the Huskin’ Bee is really the episode where I feel Over the Garden Wall becomes what it’s supposed to be. If I had to pick a word to describe this series it would be “Autumnal” or, if you’re American: “Fally”, and Huskin’ Bee is by far the most Fally episode of the bunch. Everything from the pumpkins, to the massive turkeys that the Pottsfielders use as transportation to the harvest setting. This episode also sees a major jump in animation quality (and Episode 1 was no slouch to begin with). Couple this with the beautiful backgrounds… 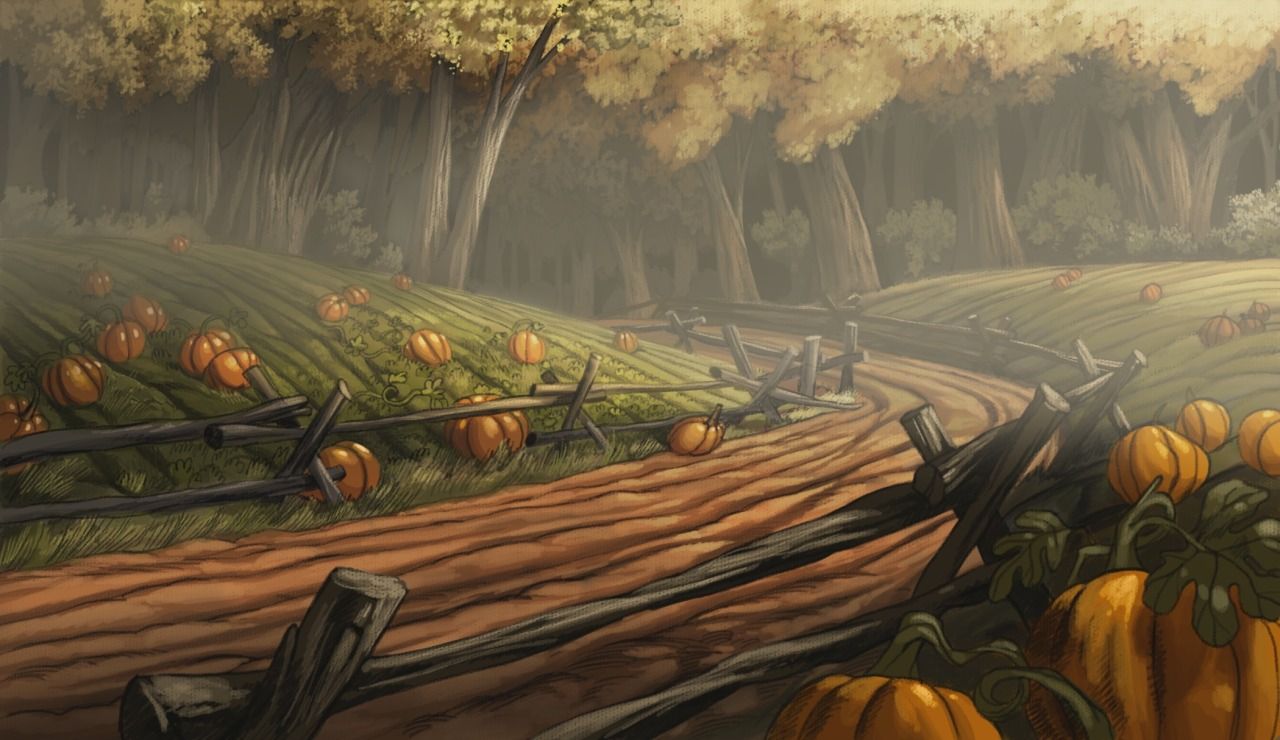 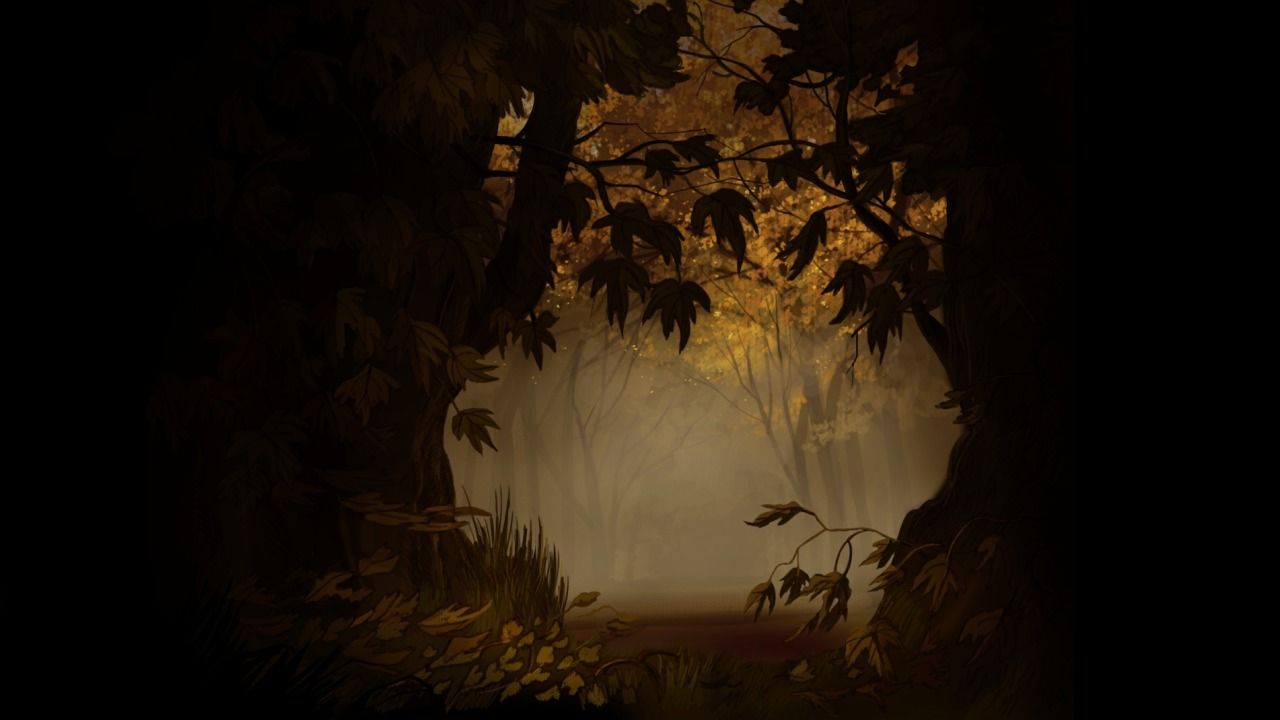 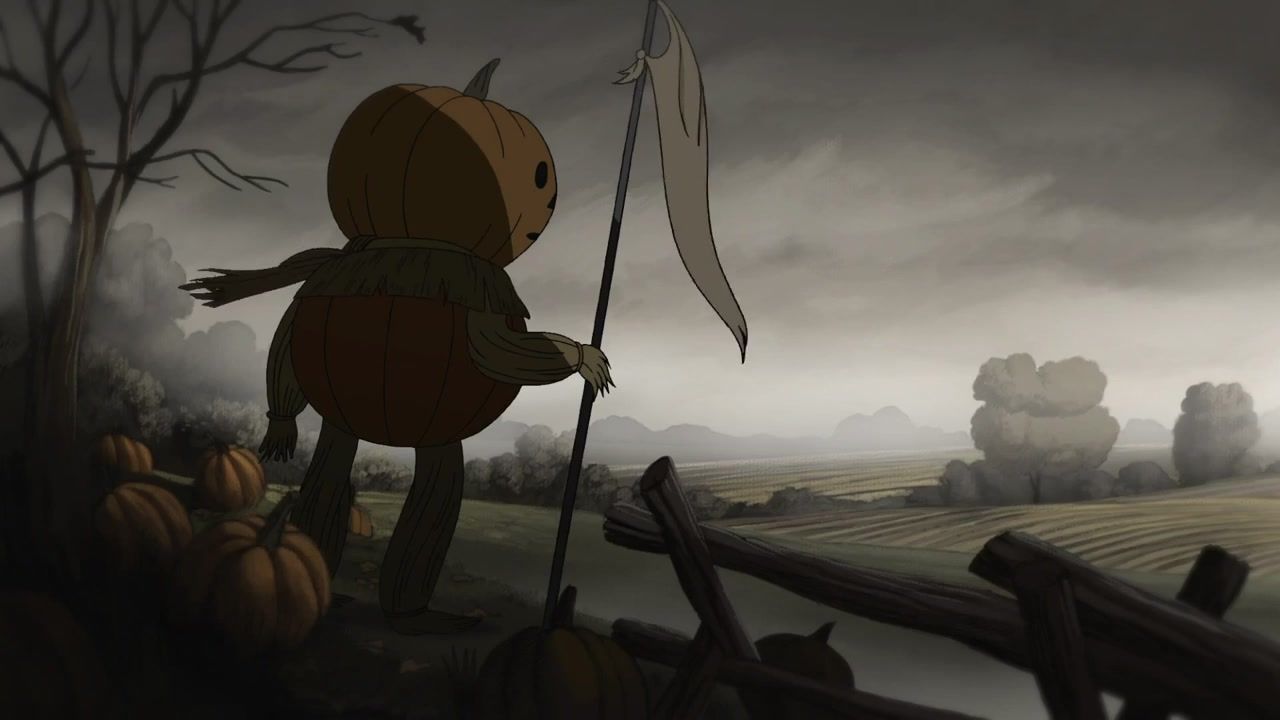 And you have something truly special.

Huskin’ Bee also sees the central trio of Beatrice, Wirt and Greg finally come together and the interplay between the three is great. It’s also prime Over the Garden Wall in that it’s beautiful, funny and at times, really, really creepy.

Can I see some references?: Huskin’ Bee doesn’t draw too obviously from any one literary source, but more the general genre of creepy small rural townships. Think The Wicker Man, Shirley Jackson’s The Lottery and a good chunk of HP Lovecraft’s oeuvre. For animation references, I dunno. Maybe a reference to the 1929 Disney cartoon The Skeleton Dance? Or they could just be skeletons.

This frog’s name is: Wirt Junior.