Okay, I didn’t really want to write this post because I know it’s just going to open up a whole steaming mess but this article on Irish Central kinda forced my hand.

Before I get into this, I need to establish a few things:

I am completely in favour of gay marriage.

I intent to vote YES in the upcoming referendum and will be encouraging all my friends to register and do likewise.

I have mocked John Waters’ beard in a public forum and called him mean names.

Now that that’s clear, let’s get on to the matter at hand.

Asher’s Bakery in Belfast were recently commissioned to create a cake depicting Bert and Ernie and encouraging eaters of said cake to endorse gay marriage. The owners of Asher’s, being Christians of a certain stripe, refused this commission. Asher’s is now facing legal action from Northern Ireland’s Equality Commission and a rather hefty fine. I have a rather massive problem with this and here is why:

The article I linked to says the following: “Would people be so quick to defend Asher’s if they refused to serve Jews, Muslims or Hindus on the grounds that to do so would offend their religious beliefs?”

Alright, now that is a sloppy, poorly thought out, deliberately misleading and bullshit comparison for a number of reasons. Firstly, it implies that if the customer who ordered the cake had been straight, Asher’s would not have had an issue with, that is, that the orientation of the customer was the issue. Secondly, it refuses to acknowledge that there is a difference between serving all your customers equally in compliance with equality legislation and the norms of a just and fair society and engaging in a political act. And yes, baking a cake depicting a couple of ambiguously gendered muppets declaring support for marriage equality is a political act. And in no free and fair society can any citizen be compelled to engage in a political act against their own conscience. As I mentioned before, the above comparison is garbage. Here are some accurate ones.

A gay baker refusing to bake a cake supporting same sex marriage only.

A Jewish baker refusing to make a cake for the PLO.

A Palestinian baker refusing to bake a cake extolling the state of Israel.

A Unionist baker refusing to make a pro-Sinn Féin cake.

A Pakastani baker politely but firmly turning down an order to make pro-UKIP éclairs.

You might agree or disagree with the choices of the above batch of bakers. But they are their choices to make. Forcing someone to make a political statement against their own conscience is not simply wrong when you agree with the baker’s position. It’s wrong. Period. That is denying the right of someone to follow their own conscience even when it doesn’t impinge on the rights and freedoms on others (it doesn’t, there are scads of bakeries in Belfast who would be only too happy for the business) .

The article I linked to above states that the owners of Asher’s are free to follow their own conscience but “the may do this in a private religious capacity, not in a public business capacity.” Here’s the problem, people don’t just shut off their sense of right and wrong when they punch the clock. We are moral beings twenty-four seven. When politicians or cops or soldiers or bankers claim that they were just doing their jobs and it wasn’t their responsibility to question whether it was right or wrong we call bullshit. Every human being has a responsibility to their own conscience, even if that conscience is increasingly archaic, backward and out of step with the rest of the civilised world.

What good is our morality if it is not ours by choice but by compulsion? If we are right then time will prove us right. We cannot steamroll over those who disagree with us and use legal and financial threat to force them to support us because that is not what winning the argument looks like. It is at that point that we have crossed the line from protecting the rights of minorities to telling free, thinking individuals what they can and cannot think and do. It is at that point that we are, to quote one my favorite movies, that we are “in their homes and in their heads and we haven’t the right.”

So what is the correct response to a situation like this? You know, if turning a bunch of homophobic bigots into martyrs and reinforcing the narrative of all-powerful PC thought police targeting vulnerable Christians is not the correct response (and clearly that’s crazy talk)? Um, I dunno. Maybe doing the same thing you always do when a bakery gives you shitty service? Tell your friends, write a scathing Yelp! review and watch as the pro-gay bakers scoop up valuable custom in these economically challenging times? Guys, I’m as much a big-government liberal as anyone but I really think this is on where the Free Market has got this.

It is possible to do wrong in pursuit of a just cause. Homophobia is a huge problem in Northern Ireland but this suit by the equality commission is exactly the wrong way to combat that. I mean, can someone explain to me the endgame here? If you knew someone only baked you a cake because someone put a gun to their head…why would you eat that cake? 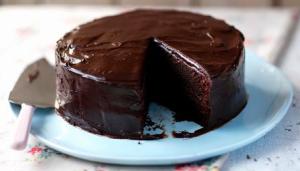 I’m…I’m not entirely sure that’s chocolate.