If you ever visit Ireland and you are even slightly interested in sport, you need to see a hurling match played in Croke Park. The fastest field game in the world, whose origins stretch thousands of years, played in front of over 70,000 screaming fans. You will never experience anything else like it.

Hurling and Gaelic football are the glue that hold this country together. Every county, from tiny Louth to mighty Dublin have their teams and the Gaelic Athletic Association (GAA) has a presence in every village and town in the country. It’s something we all do together. We have players whose families have been in Ireland since the Ice Age, and players who just got off the boat from Nigeria or China or Poland. It’s a beautiful thing, and I say this as someone who doesn’t even sport. But if you were to see a game played in Croke Park and you were able to tear your eyes away from the field and scan the crowd, you might notice something a little weird. 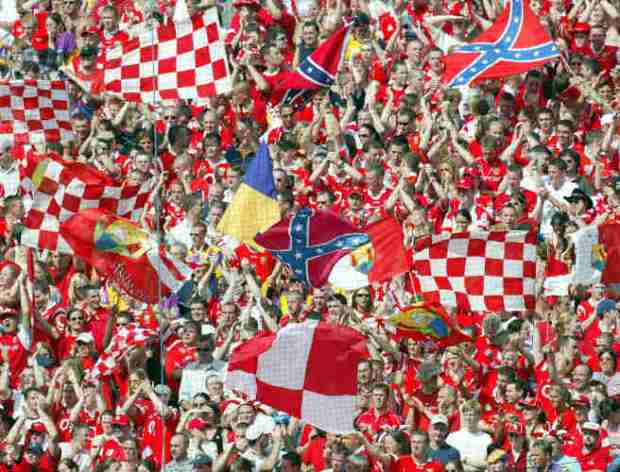 So, a controversy that has been quietly bubbling in Ireland for the last few decades is the…tradition…of some County Cork fans to fly the Confederate Battle Flag during their matches. Why do they do this? Well…it’s sort of a…joke.

So here’s the background. County Cork is the largest county in Ireland by area and has the second largest city in the republic, Cork City. And it’s a lovely place. Gorgeous scenery, tons of history and the people are really, really lovely despite having an accent that could shatter glass. Now Cork has always had a bit of a rivalry with Dublin because we’re deadly and it’s not unusual for Corkonians to refer to their city as “The Real Capital”. Cork is also known as “The Rebel County” because, during the Civil War (the Irish Civil War, I mean) they were a centre of Anti-Treaty resistance whereas Dublin was the seat of the Pro-Treaty government. And also, the Cork county colours are Red and White.

See what they did there?

Like I said, it’s a gag. Not a very funny one. But it’s not like Cork fans who fly the flag are advocating slavery or white supremacy, they’re just implying that Cork is going to rise up and overthrow Dublin (as if, we would crush the rebellious dogs). But, as many people both inside and outside of Cork have gained a greater understanding over the years as to just what that flag represents, the rising chorus of “NOT FUNNY!” has started to become deafening.

And I have a solution. I’m not here to lecture anyone. I’m not here to soapbox. I would just like to point out that there is a perfect alternative to the Confederate Flag for Cork fans to use.