So here’s something hilarious; I actually thought this was going to be an easy review. “Three episodes of Steven Universe?” I thought “That’s only half an hour’s worth of animation! I can do that in my sleep! I can wrap this review up in one night and take the rest of the week off to maybe work on some other things and actually be a writer for once!”

Of course not. Because before I can get into reviewing Steven Universe I actually have to explain what Steven Universe is and the backstory of the show to people who have never seen it. And with a backstory this epic, I have been forced to employ special tools. Please click this link.
(NOTE this link may not work on all devices, I’m working on getting a video to embed in the post but that may take some time. In the meantime, the Mary Sue gives a good run down of the backstory)
So yeah, that is the incredibly dense and rich mythology that the series has built up over one hundred episodes and is IN ABSOLUTELY NO HURRY TO LET YOU IN ON. Seriously, this show is such a goddamn tease, I’d say it drip feeds its backstory but these aren’t even drips, these are molecules of plot moisture. 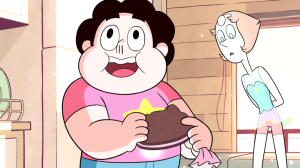 I kid, I kid (mostly). One of the show’s charms is actually how it carefully builds up its world and devotes time to the various characters that make up Steven’s social circle, whether it’s the gems, or the various residents of Beach city, or his father Greg. And all these characters are so wonderfully layered and charming that even episodes where nothing substantial happens to move the main plot forward feel worthwhile.

Except Ronaldo because, oh my giddy Aunt, FUCK RONALDO.

So this show first aired in 2013 on Cartoon Network and is the creation of Rebecca Sugar, a former writer and storyboard artist on Adventure Time. At the top of this post there’s some concept art from the original pilot which was much more “Adventure Timey” in its animation and style but the actual series looks quite different. The show has a simple but very elegant art style favouring beautiful painted backdrops and clean, uncomplicated character designs. The music is also really inventive with original songs featuring in many episodes (it helps that the main and supporting cast are crammed with professional singers). But all that would just add up to a very good looking and sounding children’s cartoon. To understand what makes Steven Universe so special we have to talk about fusion.
So, when the Crystal Gems are battling a threat that’s too powerful for them to take on alone, they can fuse together to form more powerful gems. Okay, hardly revolutionary. Power Rangers, Digimon and Transformers have all used a version of this trope to one degree or other. But here’s the thing. In Steven Universe fusion is very explicitly a metaphor for, well…

Okay, well maybe that’s a little simplistic. The metaphor is fairly elastic and, depending on the episode, fusion can be a stand in for a romantic relationship, platonic friendship or sometimes just the hard fucking. It’s also really important to remember that within the universe (heh) of the show, it’s none of those things. In the world of Steven Universe, fusion is not sex, or relationships or anything else, it’s fusion. It’s its own thing with its own rules and norms and etiquette. This is important to remember because if you treat the metaphor too literally it can go to some weird places. Like, the episode A Giant Woman where Steven first learns about fusion and sings a song about wanting to see Amethyst and Pearl fuse. If you take it to literally mean sex then it becomes the story of a creepy little boy wanting to watch his two foster mothers fuck.
So. Don’t do that.
So today we are going to be looking at three episodes from Season 2; A Cry For Help, Keystone Motel and Friend Ship. Let’s take a look. (Oh and, needless to say, there will be spoilers both for this episode and the series more generally so be warned.)