Okay, paws in the air, I kinda goofed with this one.

My whole concept (nay, vision!) for Bats versus Bolts is taking a Frankenstein movie and a Dracula movie that are contemporaneous and comparing them side to side to see whatever random insights on movie-making or film history or social trends or whatever crap shakes loose basically. The point is, they’re supposed to be films from the same era. Frankenstein and Dracula  were both released in 1931. Curse of Frankenstein and Horror of Dracula were a year apart. Mary Shelley’s Frankenstein followed two years after Bram Stoker’s Dracula.

Conversely, while the better known of today’s movies, Nosferatu, came out in 1922, our representative for Team Bolts was released a full dozen years previously. Frankenstein was released in 1910, and the more I’ve come to work on this post the more I’ve realised that comparing these two movies is kind of farcical. Firstly, while both movies do belong to “the silent era”, that’s a definition so broad as to be almost useless. The silent era lasted over forty years, and went through multiple evolutions and revolutions in style, technology and presentation. Secondly, while all of the other matchups in this series were made in the same country (America, the UK and America again), here we’re comparing a very primitive silent American short from 1910 and one of the greatest examples of German expressionism in all of film from over a decade later. Is that in any way a fair or meaningful comparison to make?

Is it bollocks. But here we are. 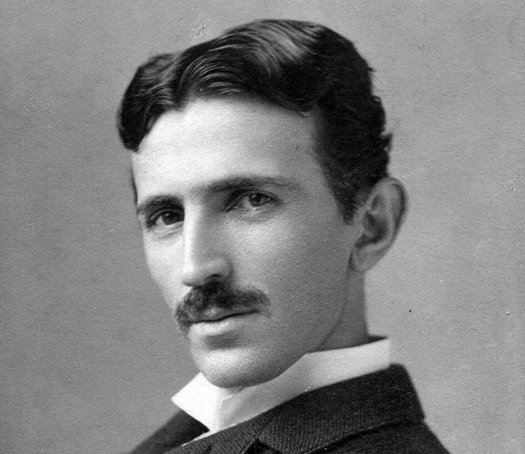 “Nikola Tesla? I thought you were dead!”

“Oh you are adorable.”

I have way too many immortal, dark haired, mustachioed men in my life. Far too many.

Anyway, age before beauty, so let’s talk about Frankenstein first. The movie was the product of Edison Studios, who produced and screened the first commercial motion pictures in the United States using the kinetoscope, drooling neanderthal ancestor of the modern movie projector which Edison may even have invented because fuck it, anything’s possible in this crazy world of ours. Now, although Edison’s name is all over this movie he actually had next to nothing to do with its creation (I know, shocking). Being on the ground floor of the new medium, the Edison company could claim many firsts such as the first romance, the first boxing film and the first Western filmed in America The Great Train Robbery (hilariously, the very first Western, Kidnapped by Indians, was filmed in Lancashire four years previously). While they may have done it first, Edison rarely did it best and the studio’s output is not very highly regarded amongst silent era fans, although more recent re-discoveries have helped rehabilitate their reputation somewhat.

Rather charmingly, Frankenstein was a movie that was thought dead and then brought back to life. The film was thought irretrievably lost like around 75% of all silent films made in America, due to being filmed on nitrate which had the durability and flammability of a rummy’s fart. Thankfully, a copy of the film was discovered in the seventies, somewhat the worse for wear but still viewable. And by viewable, I mean “you can watch it right now” as it’s only 12 minutes long and the copyright on it has expired and it’s not like Thomas Edison is going to rise from the grave demanding it be taken down from YouTube.

If told you that it was a production company created by a mysterious German occultist to produce supernatural themed films which then folded suddenly after creating this one, terrifying masterpiece would you, as I did, punch the air and say “Oh fuck yes“? Because that’s what we’ve got here, people. That’s what happened. Fuck yes.

Now, granted, the reason why occultist Albin Grau’s Prana Films folded does not include mysterious drained corpses showing up every which way, and more’s the pity. It actually had to do with Bram Stoker’s widow suing his Teutonic testes for filming an unauthorised version of her husband’s novel.

Do not come between an Irishwoman and her royalties. She will cut you down.

Anyway, despite the film-makers hunnish perfidy, what they created still stands almost a century later as the greatest vampire film of all time. And yes, it’s also public domain so you can watch that too.

Frankenstein really is a film from a time before anyone knew what the fuck they were doing in terms of pacing and staging.

Scene 1: Frankenstein goes to college and says goodbye to his fiancée and father.

Scene 2: Frankenstein discovers the secret to LIFE ITSELF.

Alright, it’s easy to scoff, but remember. This was a time when people couldn’t see a train coming towards them onscreen without running screaming from the theatre. A jig-sawed together shambling corpse man might have led to a fatal epidemic of the vapours.

In Germany in the 1920s, of course, they were made of sterner stuff. Young German lawyer Thomas Hutter travels to Transylvania at the behest of his employer Herr Knock to sell a house to the mysterious Count Orlock. Upon suspecting that his host is a vampire and a threat to pure Aryan womanhood*, he escapes the castle and returns home to save his wife Ellen from Draculock with the help of Professor Bulwer.

“See ALL you motherfuckers in court.”

Edison Studios specifically set out to make a tamer, uncontroversial version of Mary Shelley’s story, which is why, instead of sewing his monster together out of cadavers, this Frankenstein makes his monster like he’s microwaving some popcorn or something. This scene, incidentally, was described by Edison’s own publicity as “the most weird, mystifying and fascinating scene ever shown on a film” which is probably true considering that the medium was so young that people would pay to watch a dude sneezing. But fair is fair, the creation scene where the monsters flesh slowly forms on a dancing skeleton is genuinely creepy. Actually, the silent era may have been a perfect time for horror films. The jerky unreality of the motion, the complete absence of any human voice, it all combines to give the queasy sense of watching a nightmare unfold.

As I mentioned, the monster (played by Charles Stanton Ogle) is not a reanimated assemblage of dead body parts, but a manifestation (I guess) of the evil in Frankenstein’s soul that he has to purge, adding in a bit of Jekyll and Hyde to the story. It’s not a great film, but it’s honestly a pretty great monster.

But. Y’know. Let’s not kid ourselves.

He is by far the most terrifying Dracula.

Nearly a century later, no director, no actor, no special effects maestro has come close to creating the pure, skin-crawling wrongness of Max Schreck’s Orlock. If Lugosi’s Dracula is still the default for this character in the collective consciousness, it’s because Lugosi is safe. Cuddly, goofy, easily imitated. Schreck, I think, never had the permanent residence in all our minds that Lugosi does because we fundamentally do not want him there.

Augustus Phillips’ performance as Victor Frankenstein is…well, it’s a silent movie performance from 1910. Big expressions, big gestures, not exactly bringing forth the subtle and nuanced layers of the character, you feel me? This is definitely the most innocent Frankenstein we’ve seen so far. For all that the film makes his inner evil the source of the monster, we see absolutely nothing of that in his interactions with the other characters. He seems driven a by a pure, childlike urge to discover. He doesn’t even engage in grave robbing! Frankly, I don’t see this Frankenstein fitting in very well with the rest of the gang.

“He hasn’t said anything in FIVE HOURS!”

“Possibly a mute. A vivisection of his throat might yield the answers we seek.”

“Oh! We could replace his tongue with an eel! And then use amniotic fluid…”

Our Van Helsing analogue, Bulwer, doesn’t really do much besides hanging outside Ellen’s bedroom looking worried so we’re going to give Team Bolts the win here just to prevent this from being a total blow-out.

That was his name and it is perfect.

“Why is this funny, please?”

“Oh nothing, nothing you gorgeous teutonic slab, you.”

Anyway, Nosferatu skillfully avoids the Too Many Dudes problem by just…not having the extra dudes. I mean c’mon. It’s 1922.

“You expect Quincey Morris? In this economy?!”

Hutter is basically German Johnathan Harker, and so is more efficient and hard working and is basically a more traditional hero than most Harkers in that he retains the main narrative focus for most of the film. Like most silent movie stars Wangenheim seems to have got the job for his ability to look VERY HAPPY or VERY SCARED as the scene requires but hey, that was what the medium needed.

Frankenstein doesn’t really have a male lead outside of Frankenstein himself, so Bats gets this by default.

I wish there was more I could say about Mary Fuller’s Elizabeth Frankenstein but…it’s kind hard to judge this performance because a) she’s hardly in it b) the picture quality is terrible and c) every scene she’s in is just terribly, terribly framed.

“What a perfectly staged shot” said someone in 1910.

I went down a bit of a wiki wormhole with Mary Fuller, honestly, and this film really doesn’t do her justice.

She was one of the biggest movie stars in the world for a few years in the late teens as well as being a successful screenwriter. But after a few flops she suddenly became persona non grata in Hollywood. She tried to re-start her career in the twenties to no avail and suffered a nervous breakdown after the death of her mother and spent the last 26 years of her life in a mental institution. It’s heartbreaking.

In Nosferatu, Greta Schroder plays Ellen, our Mina who is quite a fascinating character, honestly. On the one hand she is portrayed as a demure, wilting virgin who doesn’t even like to see flowers killed. But by the end, she’s actually one of the more pro-active and heroic Minas. Entirely on her own bat (heh) she researches vampires and then sacrifices her own life to lure Orlock so that he can be destroyed by the dawn’s sunlight (an invention of Murnau, vampires had never been depicted as being harmed by daylight prior to this). Couple that with quite a lot of screentime, and you could argue she’s actually the movie’s principal hero.

No vampire ladies unfortunately because it was the twenties and feeding on the blood of the living was considered unladylike.

Are either of these movies actually, y’know, scary?

Frankenstein is a little creepy which is far more than I expected from a 110 year old film.

But Nosferatu…shit. Did you hear that? Sounds like someone’s coming up the stairs…

Real close contest here. I do love the line “……………” from Frankenstein but Nosferatu has the absolutely iconic “……………..” (even though it’s been ruined by being quoted so often).

NEXT TIME: Bats versus Bolts month continues and it’s time for us to jump to the other end of movie history. It’s the 2010s. Which means it’s time for sexy superhero monsters who FUCK.

* Okay, because nothing originating in Weimar Germany can be discussed without bringing the fucking Nazis into it let’s get this out of the way. The movie has been accused of perpetuating anti-Semitic tropes with Orlock and Herr Knock. It’s not entirely invalid reading but honestly I think it’s people reading things into the movie with the benefit of hindsight rather than anything consciously placed there by the film-makers. Murnau emigrated to the States long before the Nazis came to power and as a gay man who worked with many Jewish collaborators, I doubt he was a fan.