Name: John Bruton
Party: Fine Gael
Terms of Office: December ’94-June’97
John Bruton first entered politics when he was elected to the Dáil in 1969, only 22 and barely out of nappies. He later served as Minister for Education under Liam Cosgrave but we won’t hold that against him. To understand how he became Taoiseach we have to re-join the story where we left off, with Labour’s Dick Spring walking out of Albert Reynolds’ government over the Harry Whelahan/Brendan Smyth clusterbollocks. Bruton convinced Spring to return to the batcave and enter a coalition with Fine Gael and the Democratic Left. This gave Bruton a majority in the Dáil and he became Taoiseach without even needing to be elected. 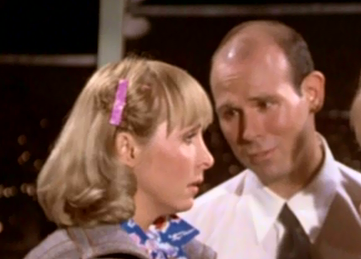 Despite some tensions with Spring, Fine Gael and Labour nonetheless managed to work together to form a government that was, in hindsight, pretty not bad at all. Despite being seen as part of Fine Gael’s more conservative wing, one of Bruton’s first initiatives was the legalisation of divorce. In 1995. Which makes us possibly the only country in the world to have internet before we had divorce.
Bringing in divorce required changing the constitution, a momentous responsibility which we Irish do not trust our politicians with any more than we trust them not to run with scissors. And so a referendum was called, and the measure passed.
Barely. By 9,000 votes. Contrast that with the marriage equality referendum earlier this year which passed 2:1 and you’ll see just how much the country has changed. Or maybe hasn’t changed at all.
See, we’re not actually liberal or conservative. We just really, really, really like marriages.
Bruton was a remarkably un-partisan politician. He called Seán LeMass (more on him later) one of his political heroes despite the fact that LeMass was a Fianna Fáiler. Bruton also had very little time for the romantisisation of Ireland’s revolutionary past. Whereas most Irish leaders before him had venerated Easter Rising leader and noted Looney Tune Pádraig Pearse, Bruton instead idolised John Redmond, the leader of the Irish Parliamentary Party who worked to achieve Home Rule for Ireland and pretty much failed completely, utterly and totally.
This brings me to the most common criticism levelled at Bruton, both during and after his premiership. Bruton has often been seen as being..um…jeez, I’m not even sure I can say this…
Ahem. Okay.
Bruton has sometimes been seen as being a little…pro-British.

Now, I am not what you’d call a hard-line republican. At all. But I don’t think that it makes me a raving reactionary to say that my country winning its independence from a foreign power was a very good thing. And judging from past remarks, Bruton doesn’t seem to really think so. He’s on record as saying that the Easter Rising was a mistake and an unjust war and that Ireland would have been better off working for independence within the British political system. You know.  Like Scotland did.

Then there was the historic state visit of Prince Charles to Ireland, the first visit by a British Royal since independence. Bruton’s speech welcoming Charles struck many as less “gracious welcome to a foreign head of state” and more “may I please wash and anoint your feet oh great monarch from across the sea?” 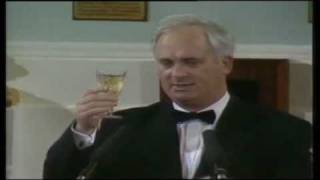 “I would look at you, oh Mighty Prince, but I fear your magnificence would sear my very eyes to ash…”

Relations did improve with Britain during this time (no bad thing) and Bruton’s government continued the good work that had been begun by Reynolds on the North, even though it often seemed like Bruton was exasperated by the whole thing. At one point, he even snapped at a reporter that he was “sick of answering questions about the fucking peace process.”, an incident for which he later apologised in his memoirs.

All in all though, Bruton was viewed as having done a pretty darn good job and was everything was looking good for Fine Gael going into the 1997 election. But then, Bruton was felled by the Plucky Sidekick Theory of Irish Political Governance. You remember that Labour was Fine Gael’s sidekick during this particular period? Well, if you read comics, you’ll know what usually happens to sidekicks. 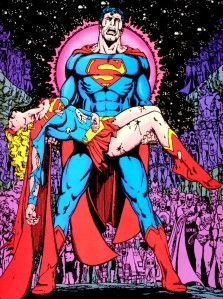 Yeah. This is a recurring problem in Irish politics. The main party and the PS enter government. Then, when the electorate thinks it’s time for a change, the government gets booted out of office with both parties losing plenty of seats in the process. If the government has been doing a particularly bad job (and this is Ireland), the damage can be pretty devastating. Now the main party, which (either Fianna Fáil or Fine Gael) dates from the civil war and has deep reserves of funding, name recognition and regional loyalty to draw on, will survive to rebuild and fight another day. But the Plucky Sidekick, which is usually much smaller, will be absolutely hammered and may even be wiped out if the electorate are pissed off enough. Irish political history is littered with the corpses of smaller parties who got clobbered with the proverbial crowbar (most recently the Greens, who were unlucky enough to be in government with Fianna Fáil when the crash happened). What’s really bizarre about the 1997 election is that Bruton actually increased his party’s presence in the Dáil. Labour, however, got absolutely annihilated (pro-Fianna Fáil voters were furious at them for abandoning Reynolds, pro-Fine Gael voters were furious at them abandoning Bruton to go into power with Reynolds in the first place). This meant that Bruton no longer had a governing majority and Fianna Fáil came to power under Bertie Ahern.
So, to recap, he becomes Taoiseach without anyone voting for him. And then, when his party wins the election, he doesn’t get to be Taoiseach anymore.
Democracy is weird.
Pros:
Cons