Hey Mouse what the hell! Where’s the Captain America 3 review?

Aw jeez, sorry, I done goofed. I completely forgot that I’ll be on holiday this week which means, unfortunately, that the review for Captain America 3 has to be pushed back to 22 June.

Mouse, you’ve let me down and you’ve let yourself down. Good day to you.

Relax. I just need to ask you something. Since Shortstember ended I’ve been mulling over ideas for a new series of animated short reviews and because I couldn’t settle on one, I thought I’d let you, my fabulous readers, decide.

What are our options? 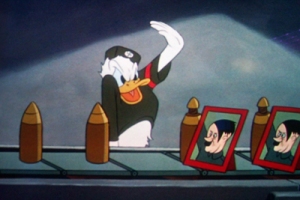 All the major American animation studios contributed to the war effort by making animated propaganda shorts. Some were profound, some were hilarious, pretty much all were racist as all hell. But, y’know, racist for FREEDOM.

An all-star cast, beautiful animation and a sublime score, Over the Garden Wall is ten shorts of pure cartoon awesomeness.

Mickey Mouse is back and actually great! It’s like 1929 all over again and not just because of the imminent collapse of Western democracy!

Look! Up in the sky! Some of the greatest animated shorts in the history of the medium!

You have many questions, however, despite the changes brought about by reading this blog you remain irrevocably human. Ergo, some of the following you will understand and some you will not. Interpolated between the release of The Matrix and The Matrix: Reloaded the Wachowskis released a series of short films by some of the greatest anime directors of the day telling stories within the world of The Matrix. Concordantly, you may wish me to review these shorts, but only if you believe it is your choice to do so, at least on a sub-conscious level.

Or…if you like the idea of short animés directed by top tier Japanese animation talent meant to bridge the gap between the first two installments of a major film franchise but aren’t really arsed about The Matrix we could just do the same thing with Batman instead.

The Censored 11 are eleven Warner Bros shorts deemed so appallingly racist that they’ve been permanently pulled from broadcast.

So. Who wants to just get really, really sad?

There’s a poll below, so get clickin’ and I’ll see you on the 22nd.

So, you gonna take a year to finish this series too?